Bringing home a trophy is always a very special occasion – from coming first at a sporting event, to most improved piano player, and so many other achievements! To quote Darryl from the classic Aussie flick The Castle, it’s something that’ll “go straight to the pool room”. But have you ever wondered about the history of trophies and the place they play in our world?

Here at Sheridan’s Badges and Engraving in Perth, we love making trophies that are a work of art, and we’re naturally curious. So we did some research and dug up some fascinating trophy facts! Without further ado, here’s the Story of Trophies. 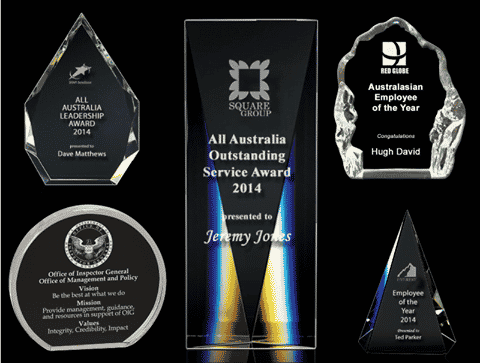 According to the fine folks at the Oxford Dictionary, a trophy is an object that you keep to show that you were successful in something, such as a silver cup that is given as a prize for winning a competition. Trophies have marked victories since ancient times, and the word originates from the French trophée, via Latin from Greek tropaion, from tropē ‘a rout’, from trepein ‘to turn’. It’s also related to the word trope – a manner, style, way or figure of speech.

You may wonder what trophies have to do with turning – we certainly did, and it’s a fascinating story. Until the 16th Century, a trophy referred to a spoil or prize of war that was used as a monument of an enemy’s defeat i.e. a “turning” of the enemy. Trophies would be made of these spoils of war, and generally shaped like a warrior and inscribed with stories of the battle. The extension of the word “trophy” to any token or memorial of victory was first recorded 1560s. Thanks, Etymonline! #todayilearned!

Nowadays, trophies are often awarded for sporting events, from youth sports to professional level athletics. Contemporary trophies are often shaped to be reminiscent of the event they’re celebrating – for example, shaped like a saxophone, a basketball or in the case of the Academy Awards a knight standing on a reel of film. Schools often give out trophies for high achieving students in various academic and sporting fields, and of course many Aussies are glued to the screen during the AFL Grand Final to see who will win the Premiership Cup.

So now that we’ve explored the story of trophies, let’s check out some of our work here at Sheridan’s Badges and Engraving! We love a good trophy, and we’ve made some awesome ones. 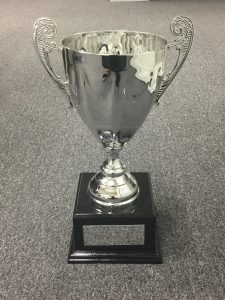 View our range of trophies

Of course, we make plenty of cool things from our workshop here in Perth – check out our recent showcase blog on personalised keyrings, our contributions to the WA Museum collection, and our trophies, award badges and medallions available for sale.

You can also check out our partnership with Different Trophies to engrave a broader range of sports, corporate and achievement trophies – read here for more info about the full range.

And keep an eye on our blog for more exciting things to come!